Don't Wait For Indicators of Interest... Make Them Happen.

Apr 29 Posted by Good Looking Loser in Get Laid

Stop Looking for IOIs and Touch the Girl

Most guys in the Good Looking Loser community have a pretty good idea of how to read girls and find out which girls are DTF and which are not. Finding out [and knowing how to find out] which girls are sexually available is key to Getting Laid on a regular basis. Most guys here don't waste their time spitting game or trying to entertain unavailable girls. Even still, this discussion is something that can be a reminder or may be insightful and cut a lot of junk out of your brain that keeps your from being aggressive. 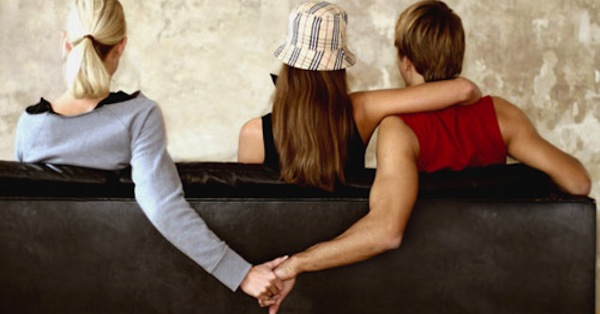 There is a term in the pick up artist/seduction community called "IOIs," known as indicators of interest. 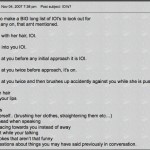 (please center this picture and delete this line)

Supposedly when you observe or get an IOI from a girl- it means she's into you.

That's true for the most part.

But there's a problem with how the mainstream community discusses and stresses the IOI's.

It's suggested or implied that you should look for (or wait) for these 'indicators of interest' to figure out if a girl is attracted to you or is sexually available. Only after getting a handful of IOI's should you assume you have a 'green light' to become physical and touch the girl. Anything besides lightly touching the girl, before observing IOI's, is "WRONG" and she'll immediately become un-attracted to you. It is suggested that- you need to abide by a women's timetable and make sure you have non-verbal signs that you are allowed to proceed.

Not only is this WRONG but it discourages guys from proactive and showing the leadership they need to Get Laid on the same day/night and that chicks are attracted to. It also makes guys constantly second guess themselves and encourages them to "play it safe," in order to avoid doing anything that the chick might not be ready for. Subscribing to this type of mindset will usually kill you at some point even if your initial interaction goes well. I've seen a lot of reports where the guy had the girl on his bed and he didn't know if he should kiss her because she didn't give him an PUA IOI.

Instead of being on constantly alert or patrolling for IOI's- simply TOUCH the girl.

If she doesn't, go talk to the next girl that is worth screening.

Simply touching a girl and touching her some more will let you know everything you need to know.

Once you feel that she's in the DTF category, look to move her somewhere more private and TURN IT UP physically.

So, rather than waiting for "signs," make them happen. Force the girl get IN or OUT. Very few guys do this, most community guys are busy trying to get IN with the girl with their jokes, stories and magic tricks.

Be aggressive- There is no losing a girl that you haven't fucked. You can't lose something that you didn't have in the first place.

If you are physically screening girls, you don't need to see or get any PUA IOI's.

If you physically screen girls (and they pass)- there's no guessing "does she like me?" "can I get her number?" "should I call her?" "does she really want to sleep with me or just want to be my friend?"

If you want to develop the skills to bang girls within 20 minutes, you shouldn't be looking or waiting for IOIs. You have to move fast, if the girl is sexually available and into you, she'll follow.

You want to Get Laid, not get PUA IOI's.

If you get them, cool.

If not, simple fact that girl is letting touch her is the only IOI you need. Run with that... all the way to your bedroom.

If you have any questions or comment, please them below-

Tags escalation fundamentals Picking Up Girls Kino indictors of interest Is She Interested? Approaching Women Get Laid or Get Lost
PRINT
DMC Firewall is developed by Dean Marshall Consultancy Ltd