--fyi I don’t proofread my lay reports, I write them fast

this was a HOT chick and a GREAT EXPERIENCE. I’m so happy and it looks like we’ll be seeing each other a bunch in the upcoming month. Im on top of the world right now and Im going to  a little more detail since this one was so damn good.

On the 3rd day of my ‘approach 100 chicks’ experiment I was at Venice Beach on a Sunday just walking around and hitting on hot chicks. On my 3rd approach of the day I was SUPER hot chick that had a lot of natural beauty, I was excited because I was feeling and the Kratom was making me feel great. Nice weather too

I stopped this babe and say, “hey hold up, stop, I know this is random but I though you were really attractive and I wanted to see what you were like. The girl said thank you and asked me my name, off to a good start. ‘I’m Chris,” she said she was Brianna. She then asked me what ‘race’ or mix I was. I know when chicks ask that- they are into me. I don’t get overly excited or nervous but I was really into this girl and had a good feeling about it. I told her to guess my race and she took a few guess but didn’t get it. I told her I’m BLACK. She cracked up and then I told her that I am “Greek and Japanese” and half black. She cracked up again and she said “only black downstairs right?” I said “no I’m bigger,” which I can actually say now since my dick is pretty solid these days.

Okay stuff is going great, I like her, she likes me. We did small talk, she was just out enjoying the day and I almost told her “I’m out hitting on 100 girls,” but I didn’t since she already like me. At this point on my other interaction, I’d leave and take a solid number… but I was actually enjoy this girl so I said, “I’m gonna walk up to the skater park thing, wanna come?” and I just grabbed her hand and started walking. Venice is pretty cool, kinda too hippie for me, but there’s a lot going on and hot chicks to talk to.

We got over the skater ramps and I sat her down on the edge of the beach. We talked and we talked.. like we knew each other for years. She admit that she was pretty nervous when I approached her but she felt really comfortable. I touched the back of her neck and kissed her. I’ve made out with about 50 girls in the past 2 months, but I swear that she tasted extra good. Im not trying to put the special tag on her but I liked her and that ALL that matters. I was real excited too, 15 minutes ago we didn’t know each other, now I’m making out with her and she’s telling me how cool I am.

I actually have A LOT in common with this chick, both played hockey, both in shape, both went to good colleges for business/pre law, she was studying for the LSAT (law school admission test), same sense of humor, etc etc. When discussing a lot of this commonalities, you run the  of getting profiled as a boyfriend but I handled that by working my hand up her thighs.. im not getting profiling as a fuckin boyfriend. I made out with her some more. She had mentioned she was getting her hair done at 2pm, so I didn’t try to take her somewhere, we exchanged numbers and she said she hopes to see me soon. We made soft plans for tomorrow. At she was standing up from the ledge on the beach, I noticed her ass. PERFECT BUBBLE. For some reason she had this shirt that concealed it… butttt I noticed and got crazy excited. I jerked off to that picture later in the day after I got home,  couldn’t control myself and I was excite because I was pretty sure we were going to have sex tomorrow. Nice!

Next day roles around and I woke up with a text from her. I called her and we set up plans for the afternoon. She was a model and only worked Thursday, Friday and Saturday. I told her to remember to take a shower and shave her face, legs and butt. She cracked up and said “okay.” **This was a joke, but read on....

She came over at 1pm, looked so yummy. Big breasts on display, tight round tushy in the back. I did the usual routine, show her the house, she her my room and then take her by the hand a walk up the street to Coffee Beans. How perfect is this girl- she buys me an iced green tea. I offer to buy hers and see says no. I kinda thought to myself ‘whys she doing this, am I getting seen as a boyfriend’… but I turned that bullshit voice off and knew that this girl just liked me.

We sat down and I didn’t wait to kiss her. I moved us to a corner seat so I could touch her legs slowly and close to the pussy. 15 minutes went by and I sat, lemme show you that hockey youtube video I told you about… we walked back to the home, I pulled her into my room and got BUSY!!

Im not that big into eating pussy, but some girls I that are so beautiful I HAVE to taste them. I probably should have kissed her more but I admit that I had to taste her and smell her. She was so turned on and when my tounge got to the pussy it was DIPPING wet and I slurped up her juices as she laid back and enjoyed herself. I hadn’t licked a pussy for so long in a while.. no hair, I went a little lower and noticed she ddin’t have any/much hair near the bottom of her ass… I was thinking that she REALLY got rid of the hair for me.

I flipped it around and said ‘my turn’ and took off my pants and she commented my thickness… I said she was turning me on and I hope I can get it into a magnum. She sucked my cock, used  2 hands… wonderful, except for the occassial bumping on her teeth, which she kept apologizing for. I had a lot of cum built up and didn’t want to release yet. So I pulled her into my bathroom and into the shower, she kneel down to suck me off again but I had her stop.. we just kisses as my cock calmed down a little. I massaged her in the shower and put the soap on her back and cleaned her ass. I was going to eat her there and she basically knew it..

We got out of the shower and I put her back on my bed and had her stick her booty out.. sure enough no hair down there. I honestly think she shaved it away (or waxed,, can you do that). I stuck my tounge right on her asshole, no teasing, I couldn’t help myself. She flinched and giggled. I told her to say stuff like “get you tounge in my ass,” “give my ass attention,” “kiss my asshole,” she happily played along and was so turned on too. We got in a 69 position and she sucks my trobbing cock as I licked her asshole. Incredible sight, ill never forget, her little asshole would pucker up went I touched it with my tongue and she’s say “ahhhhh….” After 10 miuntes or so of that, I flipped her over and I was time to fuck! Her whole body shook went I inserted.. went slowly even though she was wet. Then, 45sec-1min later I really started pumping and she was screaming. Lasted only about 20 seconds after that and we came at the EXACT SAME time! Beautfil. We just laid there admiring the sex we had and the mess we made (mostly her) haha… sometime after we both dosed off. 2 hours later we woke up and I had her suck me and I put a load down her throat. After I fingered her and got her off.. what a fucking day! The amount of our juice that coveed my sheets was crazy. The room reeked of hot sex. I decided to clean my sheet though.

I love it when everyone in the house hears me fucking a girl it’s a rush!! Great sex and Brianna will be back in my bed soon1!

Tweet
Screen with Silent Game (Kino, Aggressive Physical...
Mainstream "I Hope She Likes Me" Game - So Much Is...

What If I Approached 100 Hot Chicks? Would I Get Any Pussy? (A Closer Look)
This comment was minimized by the moderator on the site

justyn
This comment was minimized by the moderator on the site

Your my hero dude.

marianx
This comment was minimized by the moderator on the site

It's stories like this that motivate me to get out there and keep grinding. Thanks Chris.

Lari
This comment was minimized by the moderator on the site 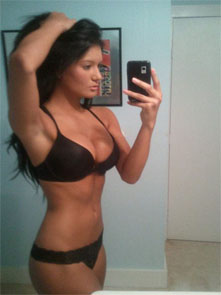