Suppose you talk to 5 girls in a night.

Sometimes it goes well, sometimes not... you know, its a numbers game, even when you get good at this shit. Not every girl is sexually available. In fact, most aren't simply due to logistics- even if they are single. That's not your fault, there's nothing you can do. There's a certain percentage of girls that are sexually available and sexually unavailable on any given day. Girls that you 'screen out' and 'get lost' usually has nothing to do with your looks, style, life or "game," so long as you are being aggressive and confidently communicating what YOU WANT- sex. But you know that.

Okay, so suppose you talk to 5 girls in a night.

Here's how to DOUBLE YOUR CHANCES-

are you super sure???

are you super duper sure????

are you super duper super.... SHUT THE FUCK UP GOOD LOOKING LOSER TELL ME YOU FUCKING ASSHOLE!!!

right there, you doubled your chances.

Do you want to know how to triple your chances????

right there, you tripled your chances.

I'm not even good at math.

The KEY to GETTING LAID is talking to girls.

This was being debated at a certain place by certain gurus that don't get much/any pussy.

One of them suggested that "being interesting" was the key to GETTING LAID.

One of them suggested that having a "positive mindset" was the key to GETTING LAID.

One of them that clearly didn't Get Laid much suggested that "carefully timed jokes when she's comfortable with you to create 'attraction spikes'," was the key to GETTING LAID.

SHUT THE FUCK UP 8-O

The key is and always will be TALKING TO GIRLS.

The key is TALKING TO GIRLS.

I could "be interesting," "have a positive mindset," and use "carefully timed jokes," and never bang pussy again if I didn't talk to enough girls.

Now, don't me wrong- being interesting and being positive can help. Carefully timed jokes won't. :)

Those are hardly the key.

Scotty thinks he has nothing on this guy.

But that's besides the point.

Being interesting has nothing to do with you meeting a girl, talking and touching her and taking her somewhere in 20 minutes (GETTING LAID).

In addition, I've had nights where I was straight up in a bad mood. Maybe I had a rough day at work or I was bummed out about something. I still got laid. It didn't matter so long as I wasn't spreading negativity like wildfire and turning chicks off instantly. Negative days and nights are few and far between for me, but not having a "positive mindset" on some nights isn't getting in the way of getting pussy. I can verify that.

I'm not saying that "being interesting" and "having a positive mindset" won't enhance your overall quality of life. You should be/have both. But it's sure as hell not the "key" to banging girls.

If you are uninteresting and not talking to girls because of it for some reason, that's a problem if you are trying to Get Laid.

If you are in a bad mood and not talking to girls, that's a problem if you are trying to Get Laid.

The problem is not talking to girls.

Sorry if you were expecting a super secret line or routine. This is easier though.

This is common sense? Maybe.

Want to lose weight? Stop eating so much fucking food and get your ass to the gym.
Want to get good at basketball? Play basketball.
Want to get a good grade on an exam? Figure out what's going to be on the test and study that material.
Want to bang girls? Talk to them.

Guys that have 6-month or year long periods without getting pussy are simply not talking to enough girls. It's usually nothing else. Maybe anxiety, depression, something else is contributing to that, but the main reason is that guys aren't playing the game. Even when you get good at this shit, you still gotta talk to girls. You just bang a higher percentage than you might otherwise.

GARY
This comment was minimized by the moderator on the site

HEY WASSUP...I WEN OUT LAST NIGHT...AND USED YOUR GUYS APPROACH BY BEING AGGRESSIVE...IT WAS A TOTAL MIND SHIFT...DIDNT GET LAID "YET" BUT THE REACTIONS I GOT FROM THE FEMALES WAS ROCKSTAR LOOKS LIKE WHO THE F IS THIS GUY TOUCHING ME...

HEY WASSUP...I WEN OUT LAST NIGHT...AND USED YOUR GUYS APPROACH BY BEING AGGRESSIVE...IT WAS A TOTAL MIND SHIFT...DIDNT GET LAID "YET" BUT THE REACTIONS I GOT FROM THE FEMALES WAS ROCKSTAR LOOKS LIKE WHO THE F IS THIS GUY TOUCHING ME...

I MUSTA PROLLY TALKED TO ONLY ABOUT 15 GIRLS BUT I MADE SURE I TOUCHED EACH ONE AS THEY PASSED ME BY...I WILL CONTINUE 2 POST MORE WHEN I GET INTO THE BEDROOM WITH A CHICK BUT THIS IS LIKE MY 3RD DAY USING YOUR GUYS METHOD AND I SWEAR...I FEEL SO MUCH BETTER...COMING OUTTA A 5 YEAR RELATIONSHIP...I REALLY NEEDED THIS...

YOU GUYS ARE LIFE CHANGERS!!!!!

Nicolás
This comment was minimized by the moderator on the site

This is old but gold. I like the way you used to write (I'm not comparing with the actual way). Made me laugh 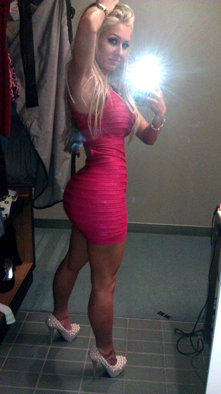