You Work For Me 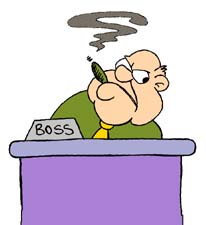 A popular concept in surrounding this "pick up women" stuff is having and maintaining an alpha "frame". This so-called "frame" communicates your confidence (or lack thereof) and supposedly is the core behind your words and actions. In general, the idea is to have solid "frame" so you don't get sidetracked from your goal- GETTING LAID. There is a notion that an alpha frame can be taught - I don't quite agree but I feel it can be developed if you know what you are shooting for and have an example to follow. Frame, just like any sort of "game" shit, is simply a manifestation of social freedom.

A wise man once saw one of the "faster/aggressive" videos and commented that I have an "executive frame."

I had never heard the term "executive frame" before but it's definitely captures what I'm shooting for. Good thinking, Sgt. Gumbles. Basically, I'm the boss - the girl is the worker. Better yet, she's the secretary. I order her around (but not in a total asshole way). I interact with her within that dynamic AT LEAST until I screen her and she passes (e.g. grab hold of her hand and she doesn't stop me). It's an effective first impression on emotionally-healthy women that like to get fucked by an alpha male with more power than they. What's also good is that the "boss-worker" dynamic remains throughout the entire relationship whether that be 1 night or several months. She'll always look at you like you are the boss. Provided you met an above-average first impression, they never forget "how" you picked them up even if they don't remember what was said. It's actually kinda funny when I catch a girl in her office attire during the week. Just based on my appearance (society tells me it's masculine), I go for a 'more-friendly but alpha' executive, not the total scumbag boss. Scotty is masculine too, but he goes for the total scumbag boss, he can't help himself. You can justify either. You might have play around with it to see which your employees respond to better. There's more to it but I'll let you think of which parts I left out. It's not because I'm lazy but because you have a better idea of what the executive frame will look like on you. Not that I owe you an explanation. I'm the boss.

This a technique. Don't think for a second that any sole 'technique' (GoodLookingLoser or PUA) will result in 'creating attraction' to the point where a girl's pussy goes from dry like Las Vegas in July to hot like Mexico. Techniques, like frame, are simply a manifestation of social freedom which is arguably slightly less important than your looks. I'm discussing the technique so your gain better perspective on the "Executive Frame" more so than suggest 'do this' and you'll get pussy. Tell Don't Ask, works like this- Instead of asking questions like, "where are from?" or "what's your name?" You would say, "Tell me where you are from." or "Tell me your name." You TELL the girl to give you the answer instead of asking her. Here are some more examples-

You get the point. Keyword is "Tell me." Executives are used to bossing people around, their time is limited so a lot of them don't ask question, they simple demand answers. Now, I don't do "Tell Don't Ask," all the time. In fact, if you watch the videos - it's probably a minority of the time. From habit, I tend to do it on the hotter girls. But again, the actual technique doesn't get the pussy, the overall looks, style and in this case- overall social freedom does (assuming sexual availability).

Keep in mind that the executive frame is not supposed to come off "rude" or arrogantly. You aren't supposed to be "talking down" to girls, even if they didn't score within 799 points of you on the SAT. That is conceited and arrogant.μ If you often find you are getting responses (aka MORE THAN ONCE) such as "that's rude." "you're a douchebag!" or "don't tell me what to fucking do!" then you've probably taken it a little far. That's okay, there will be a learning curve with this, especially if you are trying to break a "nice guy" frame. Keep at it, but remember- she works for you but you have keep the workers happy so they remain productive - or in this case, turned on. μ - still better than being a nice guy :)

There's a popular concept/affirmation in the PUA community that states tell yourself that "I'm the prize!" in order to establish and hold a masculine frame. This is groundbreaking to a lot of nice guys that place so much value on whatever girl they are speaking too, especially if they are hot.

The problem with that, however, is- that's a far as the "affirmation" goes.

Rather than talking to a mirror (you know what I think of affirmations) or pretending, try this instead- BE THE FUCKING PRIZE.

A minority of guys will say, "that's superficial!" That's right. It's superficial. Women are superficial and so are we. It doesn't make us emotionally unhealthy. My goal is to GET YOU LAID not "give advice so long as it's not superficial." Besides, "superficial" or not. Women are attracted to sexy guys. That doesn't necessarily mean just the "good looking" guys, rather the guys that "look good." Like David DeAngelo said, "attraction isn't a choice!" He just didn't know what he was talking about.