How To Use This Information, The Secret To Life, Etc.

If you've done something for a long time and haven't been successful it might be best to "forget" everything you [think you] know...

This applies to anything- picking up women, getting in shape, learning a skill, learning how to play a sport, video games, life, whatever...

The guys that we work with have various skill levels, some guys have done 10,000+ approaches and some guys are just starting out. From what we've seen- if you have been a part of the "pick up community" (industry) chances are you've 'picked up' a lot of garbage that is completely unproductive, inefficient and in a lot of ways- makes you WORSE with women. This is also true of guys that have 'studied' dating columns from the introverted and sexually-inexperienced writers from the more mainstream sources such as AskMen.com, Men's Health or Maxim Magazine. There's a lot of junk out there. I studied it for years in my 20s and it hardly helped me out. It probably confused me more.

As you may have noticed, we offer different advice than mainstream dating.

So if you're reading GLL.com or in the process of learning for the first time or rebuilding yourself, you will get better faster and get more results if you [try to] forget everything you've ever learned about dating/sex. It also helps to not read other dating/sex material. We have everything you need on this site. For free. That's not because I'm trying to push my material on you but rather there is definitely such thing as 'information overload' when you just start freezing up and you have no idea what to do because there's so much 'theory' aka bullshit in your head that you haven't applied.

That brings me to another thing- How To Use This Information, The Secret To Life, Etc.

There's a endless list of stuff that I want you to forget- this is a good starting point to clear your mind:

If you have ever wondered the truth and history behind the ‘seduction community’ – here it is: Aaron.Sleazy.Debunking.The.Seduction.Community.pdf *

There's some key things to [re]focus on:

So there's a few things.

If you've read this blog a few times, you'll probably notice that we don't follow any rules, social norms or whatever (after all, I'm naked showing my dick on one of the pages- see "Get Hung")... haha.

We encourage you to make your own rules in your life. That's what this is all about anyway.

While most of our readers/listeners are pretty open-minded and super determined, there's a few that think they can expand their comfort zone, self improve and bang 50 super hot chicks in a single year by not trying ANYTHING new. Listen up- Whether it be women, dick enhancement, lifestyle, fitness or ANYTHING- at first, you might see some stuff and say "That's not me," or "I couldn't do that," or Scotty's favorite "I'm not congruent with that," to happily excuse yourself from trying. That attitude isn't going to take you very far. A year later you'll be in the exact same position wondering how to help yourself again. Learning to do something new requires doing something new. Most of you guys get that though.

Tags:
Best of Good Looking Loser inner game Picking Up Girls The Secret Approaching Women fundamentals screening
What If I Approached 100 Hot Chicks? Would I Get A...
Relax. You'll Eventually Get Pussy. 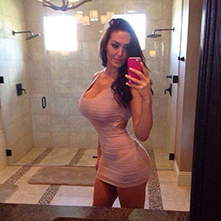