In this article, drawing from some research and my own experience with women we are going to discuss-

I reviewed all the studies I could.

Unfortunately, very few of these studies are actually published in academic journals so I put a higher emphasis on the [seemingly] more legit studies and took the other with a grain of salt. 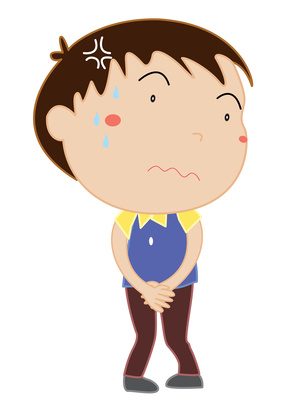 Lets wrap this up quickly.

In my opinion- SIZE MATTERS IF IT MATTERS TO YOU. I discuss this here- "Does Size Matter?"

It mattered to me, so I made it bigger.

I'm completely happy I did.

If it matters to you, stop searching for information to try to convince yourself otherwise and just enlarge your dick with methods that work.

For most women- it matters too.

But not enough for you to care if you don't or if you aren't small.

For women it's on lower on their list for relationships and among a host of criteria (masculinity, looks, confidence, attentiveness, quality of foreplay) of what produces a good experience for a random hookup/fuckbuddy. Several girls have told me that penis size (especially thickness) matters more for an enjoyable one-night-stand than in relationship.

On strictly physical terms, penis size only significantly matters for the quality of vaginal orgasms you can generate. Basically your mid-shift girth causes vaginal orgasms by stimulating the receptors 2 to 4 inches inside the vagina. Most guys have a penis over 4" inches in length, so it's a matter of girth at that point. Although you may be able to give vaginal orgasms by hand (G-Spot, for example) the sensations are significantly stronger when the girl feels "full" and her entire body is spasming from your girth touching her vaginal receptors from top-to-bottom. Arguably a 5" penis with 6" girth (unlikely to exist) would stimulate vaginal receptor significantly more than a 7" penis with 4" girth.

It is my opinion that most guys can get to 6.5-7.0" in length and at/over 5.5" in girth. From the statistics below and my experience that size is in or above the top 10%. Almost all guys can gain 1.5-2" inches if they commit to male enhancement as their number 1 goal.

Average Penis Size in the USA

From the studies (see below) that cumulatively measured thousands of Americans, the average penis size for adult men in the United States seems to be 5.5-5.7".

Certainly smaller than the 6-6.5" range that gets thrown around so often.

As explained below, only self-report survey report that the average penis size is over 6".

Non-Bone Pressed Measurement (with the rule on the top of the penis, not on the size) 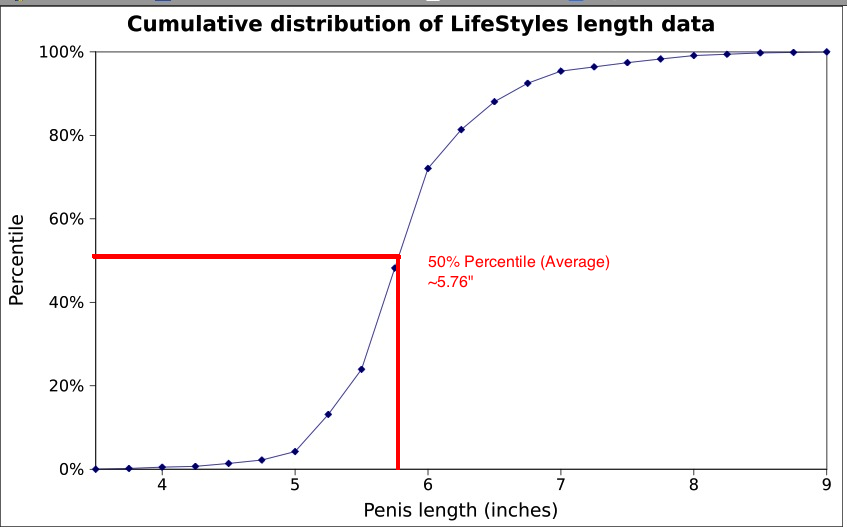 According to Lifestyle Condoms, the average penis size is ~5.76"

In reaching this 5.625" figure, I threw out the the 1948 Kinsey study where guys measured themselves and reported their penis size. Penis size in America has probably gone up since 1948. People are just bigger and taller. Even though penis size isn't entirely related to body size, there is some correlation.

It makes no sense to reference this study simply because it was the "biggest" study when guys got to decide what their penis size was. I'm surprised this 50+ year old self-report survey is even discussed today. According to Ansell Research (the manufactures of Lifestyle Condoms), every self-report penis survey concluded that the average penis size was over 6" while every controlled (supervised) survey had an average under 6".

Of the studies, the Lifestyle Condoms study seems the most legitimate. A trained medical staff measured and record the results from 300 guys in a private tent in Cancun, Mexico. There are further details at the end of article.

It's also be notable to point out that- it's impossible to know if any of the guys surveyed had done penis enhancement. Even if just 5-10% of the guys did, the ACTUAL "natural" averages would be even lower than the documented.

I also believe the average penis size in the United States is smaller than 6".

Once my penis reached 6.5" I started to get known for having a "big" penis in my social circles. Even some guys would indirectly ask me which girls I slept with and how often so they could avoid future comparison. If the 6-6.5" "average" range was fact, my dick should have been perceived as average or above-average, at best. What's more, most of the girls I sleep (to this very day) volunteer the information that I was "the biggest" they have been with. Remember, although my girth is significant (6"+ post-bathmate) I'm just slightly over 7.0". Big, not hardly "huge" by any means.

How Uncommon is A 7" Penis? 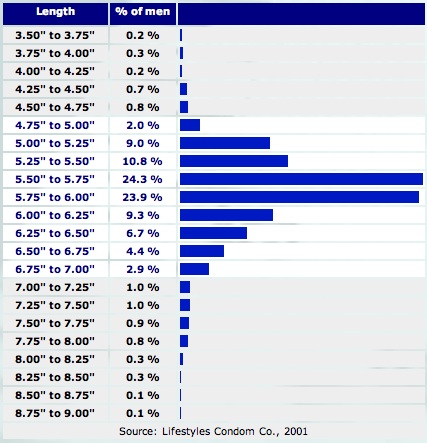 A recent hook up with a "I'm so experienced" sexy girl in Portland might be curious of this subject. (see below)

According to the Lifestyles Condom study and my experience (with women that have compared my 7-incher to their previous partner) it's quite uncommon.

As I mentioned before, if they take male enhancement seriously-

Not surprisingly, guys have a tremendously skewed perspective of penis size from pornography, general self doubt and women who have no idea what are they talking about. The average penis size, 5.7635" according to Lifestyle Condoms and 5.625" via my own statistics is about 1/2 inch LESS than what most guys think it is. 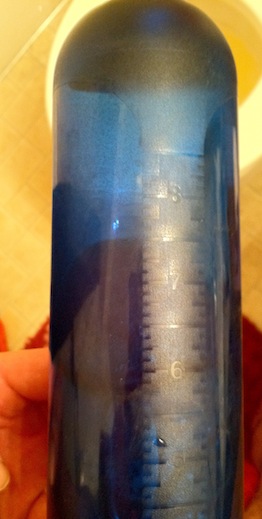 Inside the Penomet Pump

Although people want to throw numbers around to pinpoint the cutoff line for this endearing status, the reality is- so long as you are above-average in length and your cock "hangs" about 1-1.5" below your balls, you will probably be seen has 'hung' by most women. Flaccid size is more important than erect size for creating this "hung" look. Literally they will see your equipment hanging down, make judgements about erect size and compare it to previous partners.

In terms of erect length, anything above 6.75" (sometimes 6.5" if you have good flaccid size) will probably get you labelled as hung, simply because you are bigger than 90% of guys.

However you may see your penis between your legs or in the mirror, chances are women see you as bigger given their small stature. The same is true for muscle size. In males, penis dysmorphia is even more common as body dysmorphia.

Given the statistics I read over, it's unlikely that the average 18-24 year old girl has been with a hung guy.

In fact, according the Kinsey Institute via the National Survey of Sexual Health and Behavior at Indiana University, 50.8% of women between the age of 18-24 reported not having sex within the past year. The 24-29 age group of females was more sexually active (only 43% hadn't fucked in the past year).

From my social circles that date back to high school, to the 6 different colleges I went to, to my social circles in Florida and Los Angeles- Among the girls- the idea of hooking up with an endowed man is actually quite taboo and exciting- even if it proves to be an average experience. Often women form their opinions of big-cock sex based on a single experience with a large guy, often that experience is painful if she isn't very sexually active or the guy doesn't know to lube her up. Girls I know admit that they would call a hung guy back after an underwhelming experience, whereas they might be less interested in calling a smaller guy back after an underwhelming experience.

Exactly 8 days ago- a nice little experience motivated me to do some research into this topic.

On Saturday, I dragged a girl pretty hot (and cool) girl back to the hotel from Pioneer Square. Unlike most girls, especially girls that I JUST met, before we had sex- she got into talking about how experienced she was. She had apparently had 19 partners, 5 of which were boyfriends. That's pretty sexually active for a girl who just turned 22 last month. She also mentioned that she's had "all different shapes and sizes."

Years ago, I would have felt some anxiety after hearing this.

These days, I'm almost to the point where I think "bullshit," and I'm pretty certain the girl is just trying to prove herself to me or something like that. I know, and you should know that after 6-8 months of using the Bathmate with a full boner, you can walk around your city with top 5% penis girth and you're thicker than 95% of guys out there. You have nothing to worry about, even if you aren't that long.

That's brings me to the next part of the story-

Upon having her removing my pants, Ms. I'm-Super-Experienced, said she had never even seen a penis so big. I asked her specifically what she meant and she clarified "both long and thick".

Now remember, I'm a little bit over 7" in length (above-average) and over 6" in girth (post Bathmate). On the larger size, but certainly not huge (updated pictures here). She wasn't just trying to 'stroke' my ego either- she insisted on taking pictures of my equipment with her cell phone, compared it various things in the hotel room and estimated that I was 10". While this was certainly a hot experience and an ego boost (I only lasted about 2 minutes actually, haha), it definitely confirmed what I've seen and heard when it comes to women's perspective of penis size-

Assuming she's not lying, I was her 20th partner.

After reviewing the statistics, it's not too surprising that my dick was the largest that she ever had. The average in the United States is ~5.6-5.7" and a 7" penis falls in the top 4.5%. I apparently was her first partner in 20 with a 7+" cock, which is confirms what the Lifestyle Condom study says.

Here's some brief commentary on of the studies I looked at.

Durex Condom Research (Self-Reported)
The average penis size was reported to be 6.2".

Kinsey Institute Study (1948) (Self-Reported)
The average penis size was reported to be 6.21".

National Academy of Surgery Study
Although this study was a controlled medical study, I don't put much into this because there is no information on how many participants there were, under what conditions were they measured and how they were measured. Any other study like this would immediately be thrown out.
Here are the numbers though-
Average erect length- 5.0-5.7"
Average flaccid length- 3.5-3.7"
Average erect girth- 3.9-4.1"
Average flaccid girth- 3.3-3.5"

"The Visualizer.net" is a neat little resource to compare your penis to various averages. I don't suggest you make much of the "self-report" studies however.

Although Kinsey self-report size study is hardly legitimate, the Kinsey Institute FAQ has some amazing information organized off of academic resources.